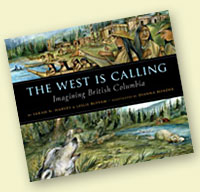 The West is Calling


In 2007, I came up with an idea for a book that would celebrate BC's upcoming (2008) sesquicentennial (150th birthday). I wanted the book to be aimed at very young readers, but I needed help with the history part, so I pressed Leslie Buffam, an historian friend, into collaborating with me on the book. Basically, this meant that she did a ton of research, we decided on fourteen key scenes, I wrote the haiku and Dianna Bonder illustrated the text.

Combining evocative haiku, informative text and luminous illustrations, The West Is Calling is a celebration, for our youngest readers, of one hundred and fifty years of British Columbia's history. Each detail-rich illustration depicts a particular moment in the province's dynamic saga, from pre-contact Haida culture, to the natural resources-fueled economic boom in the 1960s and beyond, to Expo 86, to the opening up of the North and the growing appreciation of First Nations' traditions. (read excerpt)