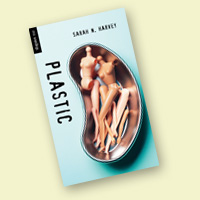 
At work one day, one of my co-workers was talking about how many young teens are getting cosmetic surgery these days—nose jobs, boob jobs, ear pinning, butt implants. You name it , teens are having it done. Their parents are signing off on it and paying for it. Happy Sixteenth birthday, sweetheart! Your dad and I are giving you new breasts! My co-worker looked at me and said, “You should write about that!” So I did. As part of my research, I talked to a plastic surgeon I like and respect. His comments about the number of teens wanting (and getting) cosmetic surgery were chilling. Internet research turned up horror stories, academic articles and blogs, all of which became part of Plastic, the story of how one teenage boy reacts to what he comes to see as the exploitation of the innocent.

When Jack develops an interest in something, he puts his all into it, making lists, doing research and learning all he can. When his best friend Leah decides to have plastic surgery for her sixteenth birthday, Jack is horrified—and then determined to stop her. Researching the surgery and the results, he finds that there are unscrupulous surgeons operating on the very young, and no one does anything about it. Jack organizes a protest and becomes an instant celebrity. But when someone else takes up the cause and the protest turns violent, Jack is forced to make some tough decisions.